NoMoreNirbhaya was launched on Dec 16th, 2016 on the fourth anniversary of the Delhi Rape Incident. #NoMoreNirbhaya – NMN is a citizen-driven movement that was started to create safer public spaces for women, girls, transgender and other vulnerable groups in Chennai.  It aims to address Gender based Violence (GBV) by promoting gender equality among all, and try to sensitize our age-old stereotypes and norms. 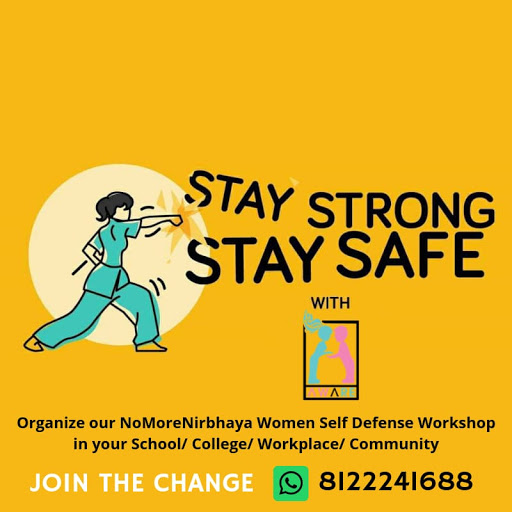 EMPOWER, a program that trains girls and women on basic self defense techniques for their own safety and protection.

Teaching girls and women, self-defense techniques has become the need of the hour as they always face a potential risk of being attacked when travelling in buses over longer routes, walking through secluded and dark areas in their neighborhood. So, we plan to introduce them situation-based self-defense training that will comprise basic techniques on avoidable and unavoidable situations.

Reclaiming Safer Spaces for Women and Girls in Chennai’ was launched on March 8th, 2017. This was the first initiative as part of our long term project #NoMoreNirbhaya where we hope to create safer public spaces for women.

A survey was released encouraging residents of Chennai to participate and voice their opinion about traveling in Chennai. The survey included mainly three areas- general opinion about safety of public transportation in Chennai, their personal travel choices and experiences; and specific questions related to sexual assault.

The aim was to get data on what people felt about travelling in Chennai. Though Chennai has been identified as (comparatively) safer city in India, we still have a lot of incidents of women facing assault. So we thought we would conduct a survey to get some numbers and act on it to make our city safer.

Conducting Women Safety Audits in city of Chennai, working with stakeholders to address the missed safety features and do training and workshops to create safe spaces like safe School, safe colleges and so on.

A curriculum that will be incorporated in school education with activities and games that imparts Gender Equality among students.